In stock (can be backordered)

With the release of the IBM PS/2 line of computers back in 1987, IBM also released a new expansion bus known as MCA or microchannel architecture.  This was a 16 or 32 bit bus with some early “plug-n-play” style features.  This includes installing and often configuring card settings via the ‘reference’ disk provided by the manufacturer.  While it was more advanced than the ISA bus, and offered 32-bit support, it was not an open standard.   Many clone systems instead adopted 32-bit VLB and later PCI making MCA a footnote of the late 80’s and early 90’s.  Even IBM later abandoned it in favor of PCI and no longer set the standards for bus design after this.  To make matters worse, few of these systems were ever used outside of business settings which makes all of the fun peripherals, such as sound cards, fairly rare today.

That doesn’t mean microchannel machines aren’t cool to have!  And now, you can have a MCA sound card for an affordable price!  Just like our 8-bit ISA versions, this card uses the venerable Yamaha OPL3 sound IC.  This chip is backwards compatible with the Yamaha OPL2 which was used on the famous Adlib card.  This opens the door to sound on hundreds of games for DOS, and Windows 3.1 on your vintage IBM PS/2!  It is fixed to use IO port 0x388,  just like the original card so no configuration is required after the card is installed.

This card is stereo 2-channel just like the Resound 2 OPL3 ISA version and uses the same high-quality op-amps and WIMA film capacitors for superior sound!  It outputs line-level via a 1/8″ (3.5mm) stereo audio-jack.  External amplified speakers are required.

As mentioned above, installing a MCA card requires you to run the reference disk for your system and provide the .adf file for each adapter installed.  This card uses the same adapter ID as the original Adlib card, the Plaidbib by @TubeTimeUS, or the custom Resound 2 OPL2 MCA .adf  below.  I opted to use the same adapter ID of 0x70D7 as it works just fine based on the card design, and just makes it easy for installation.

Please note, some IBM PS/2 machines such as the Model 30 line use an ISA bus.  Please be sure your system is in fact a microchannel before ordering.

Pictured in later photos is the card with a metal bracket installed.  It is possible to use the bracket from an old IBM Token Ring Card (and perhaps others) with this card.  We picked the IBM Token Ring card since they are rather plentiful, fairly undesirable and cheap.  It’s a simple matter of drilling out the old rivets, and using a small screw and nut to secure the bracket to the Resound 2 OPL3 MCA.  Originally we sold this card without a bracket at all, but over time we have gained the knowledge and equipment needed to print our own brackets.  You will receive a card with a 3D printed bracket.

This card has been tested in an IBM Model 50z as well as an IBM Model 70 and they both behave perfectly.  We do have a few other microchannel systems which are not operable at this time, but we hope to extend the testing to other systems as possible.  The heart of this card is the CHIP 82C611 MCA bus controller IC which was used on many third-party cards.  It is designed to work with the MCA bus timing, so we do not anticipate compatibility issues with any microchannel system.  The card is technically 8-bit, but fits physically in a 16-bit MCA slot.  It will also work in a 32-bit MCA slot.

Many thanks to @TubeTimeUS for making the Plaidbib card, a replica of the original MCA Adlib.  After studying his schematic, and then reading the 82C611 datasheet very extensively, we were able to bring the OPL3 version to life!  We look forward to working with the MCA bus more in the future, and are already working on a few ideas! 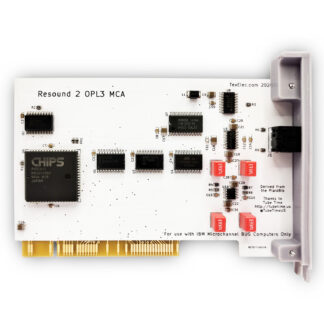