In stock (can be backordered)

We’re very happy to announce the release of the Resound New Wave MCA.  This card is a modified clone of the Snark Barker MCA which itself a recreation of the original Sound Blaster MCV Model CT- 5320.   There are some enhancements in our version over both the original as well as the Snark Barker, but if you’re reading this, then you have probably already experienced the pain that only a microchannel computer can bring.  Some of the issues which were present in the original release of the Sound Blaster MCV have been addressed in this version, such as poor joystick response.  DMA issues are present depending on which machine and which application you are planning to use.  It is very important that you understand you may have struggles with this card.  In some cases, you may be able to resolve them and in other cases, you may not.  If you intend to buy this card, please read the description below, read about known issues and be aware that not all system combinations have been tested yet.  You may well encounter a new issue, so be prepared to spend some time working through them.  It’s part of the joy of vintage computing! 🙂

Description:
The Sound Blaster MCV microchannel is equivalent in functionality to the Sound Blaster 2.0 ISA card (CT-1350).  The Resound New Wave has some differences but will fundamentally work in the same manner as the original card.  We redesigned the Snark Barker MCA with cost reduction in mind.  Some of the parts on the recreated card are out of production and honestly, I just prefer the OPL3 to the OPL2 in general.  The OPL3 IC is backwards compatible with the OPL2, and most DOS PC games will only have an OPL2 or Adlib FM track option.  Any game which does support the OPL3, will not work unless you can tell the game to use port IO ports 0x388-0x38Bh for the FM soundtrack.   The original card had support for the SAA1099 “GameBlaster” ICs and we also removed these sockets.  They were not functional on the Snark Barker, and it seemed like getting them to work was proving quite difficult.  The original Adlib card uses port 0x388-0x389 for the OPL2 IC, but as mentioned, the OPL3 uses 0x388-0x38B, but the OPL3 will behave as an OPL2 if no data is sent to the other two ports.  The Sound Blaster only presents the OPL2 on 0x388-0x389 to maintain Adlib compatibility.  For the Sound Blaster 2.0 the IO Map looks like this (assuming the card is set to IO 0x220):

This map leaves no IO space between the OPL2 and the DSP.  Honestly, even if there were space, it would be unlikely any application would try anything other than ports expected on a Sound Blaster 2.0.  As a result, the OPL3 will always be stuck in OPL2 mode if the application is using the card as a Sound Blaster.

The original DAC IC is no longer in production, but a more modern surface-mount replacement exists.  Likewise, the circuit for the joystick was modified to use faster and off-the-shelf ICs.  During development, I spoke with Eric Schlaepfer, the original designer of the Snark Barker and he had suggested speeding up the logic.  After quite a bit of testing, we moved all but one IC from HCT to ACT logic.  These ICs are quite a bit faster than HCT or LS logic, but the net result is that our test systems operated the same as before.  We went ahead and left the faster ICs on just to ensure as much headroom as possible.  Without a reimplementation of the DSP, there is probably not too much more which could be done to improve compatibility.

I have always thought the original Sound Blasters sounded a little muddy and while working on this card, it began to make sense why.  The original card has a low-pass filter of approximately 3.8KHz.  Basically, that means any frequency above 3.8Khz will start to roll off quite rapidly.  Since the card can play back 44.1KHz sample rates, it’s really a difficult decision to decide where to put this roll-off.  Many DOS games of the era likely use samples were much closer to 8 or 11KHz, so a 4KHz roll off may made sense.  I decided to play around a little and see what it sounded like if I moved the roll-off to around 17KHz instead.  This opened the high-end frequencies on 44.1KHz samples quite nicely, but according to the Nyquist Theorem, this is probably not ideal.  Three resistors control this roll-off frequency and could be easily returned to stock values if desired.  For now, I plan to leave the roll-off higher.  Not sure if it’s the newer DAC we are using, or what, but it sounds great to me no matter what frequency we playback, and muddy with the lower filter.

We also decided to remove the microphone input.  I know there may be a very small handful of games which need microphone input, so my apologies for that if it was the one you were waiting for.

We now include a 3D resin printed bracket with the card. It’s fairly sturdy, and keeps the card in place as it should.

Compatibility:
If you read through the GitHub repository for the Snark Barker MCA, you will find a quote from a former Creative employee talking about how much they dreaded getting a call on this card.  The reality is that some machines seem to work relatively well, while others are more problematic.  The DMA response seems a little slow on the card in general, and I believe some apps will wait a little longer than others.  In addition, I believe there may have been slight changes to the MCA bus as the system evolved into the early Pentium era.  Whatever the cause, there is a decent list of machines which have already been tested with the Snark Barker.  I currently have two machines I’m testing with which happen to be on the list of machines tested with the Snark Barker.  My experience has been the same with both the Model 70 and Model 56 (Reply 486SLC/50) as the Snark Barker, so I feel pretty good in saying the list will also apply to the Resound New Wave MCA.

There are simply too many topics to cover in this section about compatibility on DOS systems in general.  Some issues are not specific to the microchannel machine and could just be issues such as a conflict with another device, or some other more traditional type of issue.  Please be aware you may need to put in a little time doing research and reading to get the card working in your setup.

Drivers:
Each card in a microchannel bus requires an Adapter Description or ADF file.  Copy this file to the reference disk for your system and run it after installing the card in your system.  You will then be able to set the IO port, IRQ & DMA ranges as well as disable and enable the joystick from here as well.  By default, it will be set to IO 0x220, IRQ 5, DMA 1 & joystick enabled.  For most systems, this will be sufficient, but if you need to make changes, simple run the reference disk and select change configuration.  The adf file may be downloaded here: @5085.adf (zipped)

There are many drivers and utility programs which will work with the Sound Blaster, but in general, DOS games do not need drivers to use it.  However, Windows does need a driver and there were some custom files made for microchannel systems in general which are all available here(external link):  9595 Page – SoundBlaster MCV

For a video demonstation of the card, see here(external link):  https://youtu.be/4IASGSBgs7A

I would really like to thank Eric once again for all his help and for cracking the secrets of the MCA bus.  While these machines can be challenging to use, they are an interesting example of the industry in the mid to late 1980’s and had some very forward-thinking features for their time. 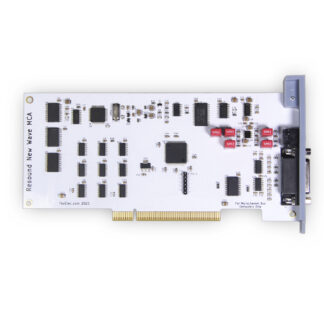